3
Inspiration from afar- a Castle/SG-1 fanfiction by SupremeCommanderofPencils
posted by kiersten11
Oh, just a fun little something I wrote :) Thanks to CelticKnot12 for assistance in editing, as usual. Read, review, but overall, enjoy :)

"Huh?" Rick замок jerked his attention back to his aggravated inspiration, Detective Kate Beckett. The subtle white noise of the busy coffee Магазин flooded back to his ears.

"Castle, I just сказал(-а) that I re-read your Книги every night in hopes that I dream of them and Ты just sat there staring at that couple like an idiot."

"Uh huh," he сказал(-а) distractedly, glancing back for a moment before he suddenly blinked and squinted at her. "Wait, Ты read my Книги every night in hopes that I'll be in your dreams?" He gave a slight, satisfied smile.

Kate stared at him, her eyebrow raised incredulously. Castle's smirk slid away to Показать a slightly disappointed look. "Oh. Right."

Beckett rolled her eyes and wrapped her hand around the warm mug in front of her, breathing in the aroma of coffee beans. "So, now that I finally have your attention, would Ты mind telling me what's so fascinating about them that Ты can't focus on reviewing the case that Ты begged to be on?"

замок pointed behind him at the таблица set for two. "Have Ты heard those two have been talking about?" He twisted around in his chair to peek over at the man and woman intent on conversation.

"No; I'm not an eavesdropper unless I'm on duty." Kate took a small sip from her cup.

"I think I found some fellow writers. No one else would come up with such an elaborate idea…" замок zeroed in on them again.

"You're listening in on a private conversation; they could be on a дата and you're ruining it for them. Stop staring!" Beckett whispered harshly, giving his arm a short smack.

"Ow!" замок flinched, turning back to Kate. "I can't help it! What these two have come up with…" His eyes slipped towards the strangers again as he added, "And two people sitting at a таблица in a coffee Магазин doesn't always count as a date." He paused, and then suddenly whipped his head back towards Beckett, pulling out his charm as he raised his eyebrows. "Unless…"

"Not a chance, Castle." Kate said, watching him with a mix of annoyance and amusement. He gave the slightest sign of a frown.

"Let's get back to the case." Beckett exhaled in concentration. "Okay, so we know the brother had an alibi at his job and Esposito and Ryan are checking out the…where are Ты going? Castle!" Kate hissed a whisper at Rick as he suddenly slipped out of his chair and strode over to the couple he was listening to. She gave a frustrated groan.

"Excuse me," замок сказал(-а) boldly as he stood Далее to the man and woman, who had stopped talking in their hushed tones the instant he came near.

"Yes?" The man looked up, slight suspicion in his eyes.

"I couldn't help but overhear—"

"Yes, he could have." Kate came up beside Rick, sending him a short glare before turning a polite look to the couple. "I'm sorry to interrupt Ты like this. We'll be going now." She directed her last words to Castle, speaking in authority.

"Oh, no, really, that's okay." The woman held up her hand, waving it in dismissal. "We were about to leave anyway." She met eyes with her friend, as if to communicate some hidden message.

"Yeah," the man agreed, looking hesitantly away from her and up at Castle. "Out of curiosity…what, uh, what did Ты hear?" He twirled his nearly empty Styrofoam cup on its base and the woman bit her lip.

замок passed a concerned glance between the two before realization struck. "Oh! Oh, no, no, no, no, I, I won't steal your ideas, I promise. I'm еще in the mystery genre, though I do enjoy a good Sci-Fi. So, what are your works?"

"Oh!" The man looked up, as if he understood, raising his finger, but then his brow furrowed again. "Wait, what?"

Castle's expression was slightly baffled. "Well, you…you are writers, aren't you? I can usually sniff them out a mile away, and I'm right 99% of the time… Granted I've only met three other writers in person, but still, it's a pretty good track record and—"

"Uh, no, we're not writers." The man looked at him with an amused smile, running a hand through his dark gray hair as he shared a glance with his friend. "Though I'm sure we could quickly fill an entire series."

"Well, what I heard Ты talking about sounded like it could be the spark for a hit book. All those what-if scenarios Ты had. 'What if mind-controlling aliens came to earth', I thought, was a nice combination between normal Martians and robots. By the way, what does SGC stand for?-Ah!" замок flinched as Beckett subtly elbowed him hard in the side.

"It stands for Космос and Geocentric Communications." The woman offered quickly. "We work with deep Космос telemetry."

Castle's eyes lit up. "You're astronauts? Tell me the truth…are there really Космос cowboys?"

"Well, we prefer to call them meteor-boys." The man said, giving a casual shrug and earning an appreciative nod from the writer.

"We're not astronauts." The woman clarified, tucking a stray piece of her short, blonde hair back in place. "We're more…behind the scenes."

"Oh. Are Ты sure you're not writers?" замок pried, squinting at both of them. "You have the great makings of one…well, from what I could hear over the Frappuccino machine anyway."

замок opened his mouth, but Beckett cut him off. "We've bugged Ты enough. Enjoy the rest of your coffee." She nodded goodbye and grabbed Castle's arm, ignoring his protests as she dragged him out of the café.

"You know, Castle, someday I'm going to lock Ты in a holding cell to keep Ты out of trouble." Kate vented as she briskly strode down the sidewalk.

замок lengthened his stride, nearly skipping as he tried to keep her pace and angle himself in front of her. "What do Ты mean, 'trouble'? I was merely asking an innocent question. You're a detective, Ты should know about asking questions."

"Not irrelevant questions; my Вопросы have purpose." She kept her eyes forward, trying to ignore the half-skipping annoyance beside her.

"More than just ruining their date?" They stopped at a crosswalk, waiting for the signal to turn.

"They weren't on a date," замок protested. His eyes suddenly gained a faraway look. "Not officially, anyways."

"What do Ты mean?" Beckett glanced up at him.

"I saw the way they looked at each other….Two co-workers, trapped by rules and regulations, unable to express their true feelings that are hidden so deep within that even they don't realize it…" He met Beckett's gaze. "Until they look into each other's eyes. And in that трещина, сплит секунда they know the truth. Oh, they know that they are meant for each other. But life, in its cruel, harsh way, makes a barrier between them so thin…and yet so impossible to break through in order to finally be in each other's arms."

Kate stared at Castle, her stance softening as she watched his eyes slowly focus again.

"Man! That is good!" His sudden outburst made Beckett flinch. He quickly patted his pockets. "I have got to write that down. Do Ты have a pen?"

Beckett rolled her eyes as she started down the street.

"What?" замок tailed her closely. "You'd read a story like that, wouldn't you? Who knows, it might even be put into a 10 год Телевидение series!" 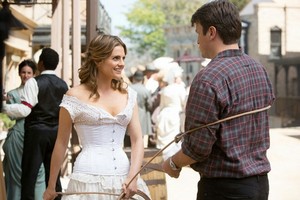 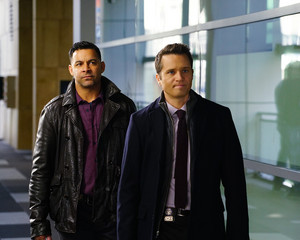 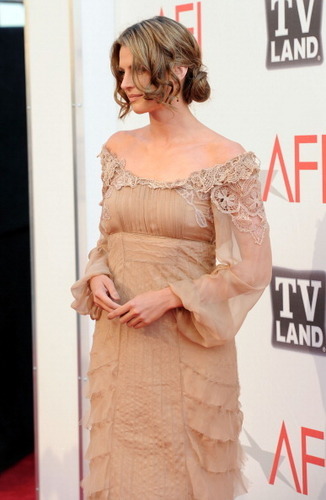 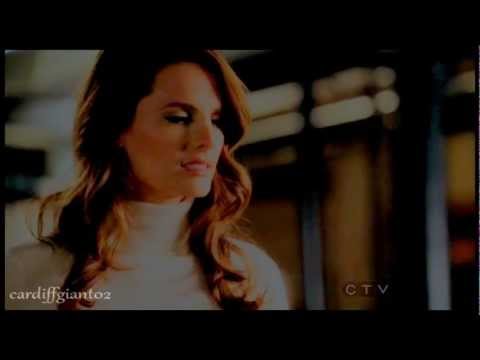 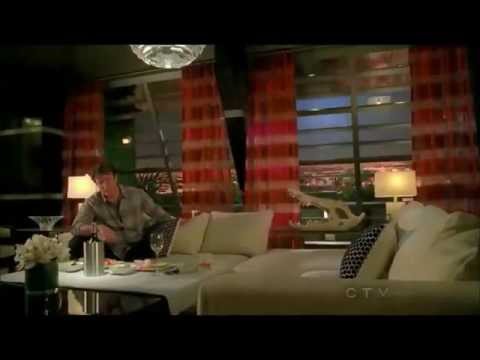 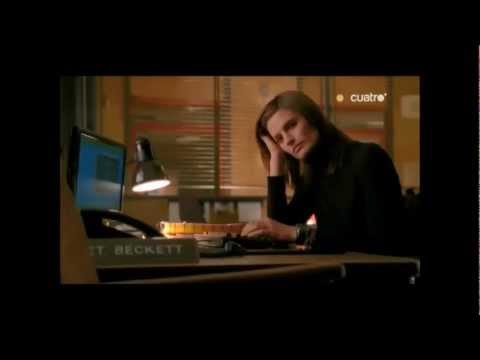 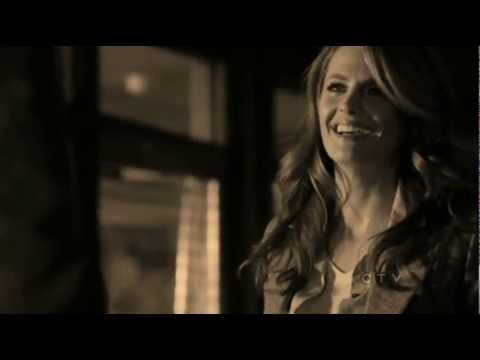 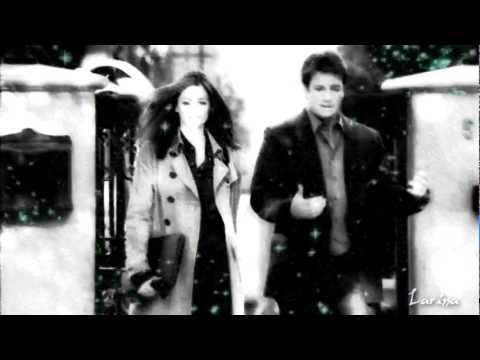 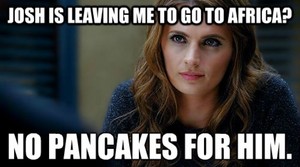 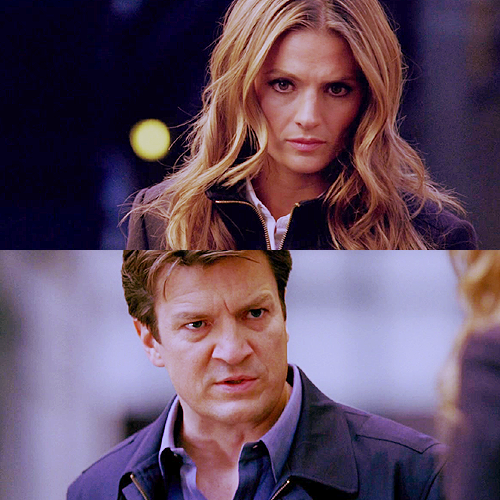 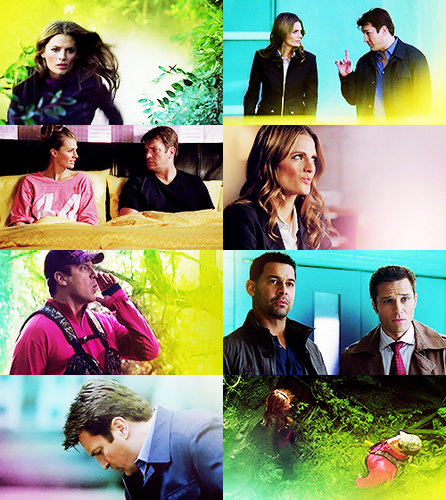