32
Kevin Calls Stelena 'Soulmates', Julie Claims They Are 'Epic'. They're Both Wrong. Here's Why...
posted by delenasalvatore
"This Показать is always going to be about Stefan and Elena. It has to be. They're soulmates."
Kevin Williamson

"No!" I wanted to yell after I'd read this confounding little statement over once, and then twice to make sure my eyes weren't playing tricks on me. "No, no, NO!!" Why was Kevin Williamson doing this? It was like he was hinting that no matter what happened, Stefan and Elena would always be together because...well, there WAS no 'because,' that was just the way things were. They were the number one couple on the show, 'soulmates', together forever. I was crushed. Then I wondered: why are they bothering to pursue the whole Любовь треугольник thing anyway? If Stefan and Elena were always going to be end game, then why drag Damon into it at all? Hasn't the poor guy been through enough? Does he have to get his сердце broken twice? (And do we really need a секунда 'Twilight'?)
It's a little strange that Kevin Williamson felt the need to define Stelena as soulmates so early on. Who was he trying to convince? Us...or himself? After all, Фаны of the Показать are еще than capable of making their own judgements on whether they think a couple suit each other или not. They don't need to be told that two people are a perfect match. By giving us one perspective of SE, he fails to take into account of their relationship as a whole. He's simply telling us: "This is how it is. They're soulmates. No explanation necessary." Actually Mr Williamson, an explanation IS necessary. WHY are they soulmates? Many SE Фаны probably cheered, thinking "Yesss! He's on our side!" but I think he's made a fatal mistake. He's put Elena and Stefan into a pretty tight box. By defining them as 'meant for each other', he's ensured their relationship can't develop any further. By attaining the 'meant for each other' status so early, it becomes impossible for the couple (and the writers) to maintain it throughout the following seasons. But it's not just Kevin. Julie Plec declared on the Paley red carpet that 'The bottom line is, Elena and Stefan are the true, epic Любовь story of the show.' It might come as a surprise to Julie and Kevin that not everyone shares their opinion. While I was Письмо this article, I came across two sources which seemed to state the opposite. TVGuide named Stefan and Elena as one of the TV couples they want to split: ("They're boring,") and Zap2it pronounced their relationship as: "We're Just Not That Into You: TV Couples Not Worth Caring About." Now while I admit to liking Stefan, acknowledging that he and Elena have chemistry together, and that they do Любовь each other; try as I might, I just cannot describe their story as epic. Maybe it's because the story of their relationship so far has nothing to do with what I'd define as 'epic love'.

What makes a relationship epic? On 'Veronica Mars', Logan described it as 'Spanning years and continents. Lives ruined. Bloodshed. Epic.' When Veronica asks him if he really thinks a relationship should be that hard, he Ответы 'No-one writes songs about the ones that come easy.' He's right. Because if it was easy, then it wouldn't be epic. And this is precisely the reason why Stefan and Elena's relationship falls short of the 'E' word. It can hardly be described as grand или impressive when Ты look at the timeline of their relationship throughout the season. On some TV shows, the writers draw out as much tension and angst for as long as possible, but with SE that just didn't happen. Stefan and Elena managed to check off the three most important moments for any couple by the tenth episode. They had their first Kiss in the секунда episode, then сказал(-а) 'I Любовь you' and had sex in episode 10. And it's only the first season!! Is that really Julie's definition of what it means to have a 'true, epic love'?
I'm not denying that Elena and Stefan don't have an intense connection, nor am I suggesting that they make a bad couple или are incompatible. What I'm saying is, when it comes to the term 'epic love', they simply do not cut it. And when it comes to accepting that essentially, they are the BIG Любовь story of the show, then I have a major problem with that, because I don't believe they are, and I would feel that way even if I didn't ship Delena. Because the biggest give-away that Stefan and Elena might not be soulmates is fairly obvious, and that is in the Любовь треугольник the Показать is based upon. Elena and Stefan are arguably not the meant-for-each-other, soulmates, epic-y Любовь story the producers are making them out to be if Elena finds herself irresistibly drawn to Damon at the same time. If Stefan and Elena really are soulmates, then it doesn't make sense for her to have feelings for Damon too. We don't know how it will happen in the show, but if she's already met her soulmate and 'true love' Stefan, then why does she later end up falling for Damon...? 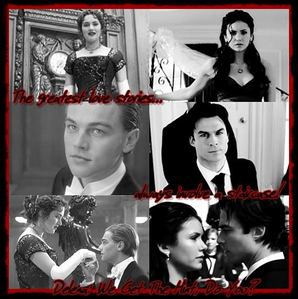 See the similarities?! Clue maybe? ;)
{I don't own any of the pictures!}

1. Because they have an "understanding".

2. She saw something in him than no one else had - his humanity.

4. They have intense chemistry.

5. They have fun together.

7. They have been compared to Jack and Rose from Титаник when Elena walks down the stairs to meet Damon at the dance.

9. Because when Damon falls in Любовь he falls hard.

11. Because at first it was an obsession as she looked...
continue reading...
54
Why Elena and Damon should be together
posted by _DarkPhoenix_
This is my opinion about why Damon should win Elena:
Damon is a much еще complicating character than Stefan. He is strong, intelligent, always wears a mask to hide his true feelings and in the beginning he is being presented to us as the bad guy who is proved not to be so bad after all. In reality, if we look a bit deeper, we will find out that Damon hides much еще behind that mask than we know.
One thing is certain: the main feelings are pain and rejection. While still human, Damon was constantly overshadowed by his little brother, Stefan. He loved his mother very much, yet she had to die...
continue reading... 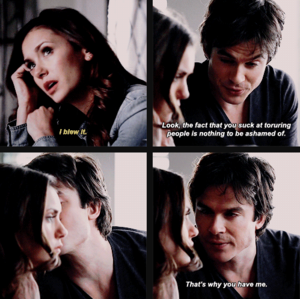 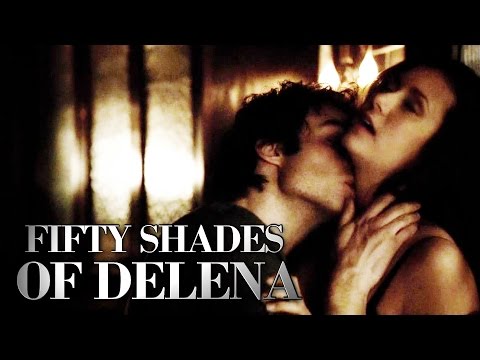