My Opinion On Freddy Vs Jason
posted by ChuckyLover1 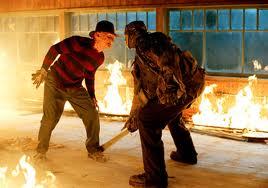 I first knew about Freddy Vs, Jason when I was 11 years old, and now im 14. That's when I really liked Freddy Krueger, that's how I became a Фан of him basically. I Любовь this movie because every time I watch it, I Любовь seeing Freddy kick Jason's butt all over the freekin place and I don't care if it offends a Jason fan, it;s my opinion DEAL WITH IT. But anyways first time I saw this movie it freaked me out but it got my interested in Freddy K. I watch this movie soo much I can't name how many times I watched it lol. But I mainly watch it because I want to see Freddy. I would have to say that this is the best movie out of all Freddy's Фильмы i've seen.

*LONG LIVE FREDDY*
And I think that there really wasn't a winner in this movie I think both of Freddy and Jason won because neither of them died no matter what happened to them. And i would like to mention Freddy looked the MOST SCARIEST in this movie than all his other movies.
1
Jason and Freddy defeat Micheal Meyers.
posted by megalentine
Although Jason and Freddy had their, um..., differences, when the two met up again, they had a very interesting conversation. It sounded like this. F: Look, I hate you, Ты Hate me, but honestly, that Micheal guy is stealing our thunder!! J: Yeah, what're we supposed to do about it? Team up and get'im? F: Hey, that's great! J: Let's do it! so they ran all around looking for micheal, until they found him terrorizing some teenage idiots. then, freddy, his claws, jason, and his machette took micheal down. obviously, it wasn't much of a fight. they had both seen the Хэллоуин movies, so they knew exactly where to go to, the head chop. sadly, we Остаться в живых a great horror star, but we've got our two избранное back on вверх where they belong!!
More Cards
1234567891011