2PM’s Junho wants to душ with his girlfriend?
posted by Bubblepop00

2PM’s Junho made an explosive Комментарий that had fangirls reeling with shock.

On June 13th, the reporters of “Good день – Entertainment Plus” interviewed 2PM at the set of their latest beverage CF.

The segment began with Nichkhun sharing his secrets on how he sculpted his body. He shyly revealed, “I just ardently go to the gym to work out.“ Taecyeon then revealed, “Nichkhun is the type who doesn’t gain weight regardless of how much he eats. He’s been working out while eating a lot of food.”

The 2PM members were then asked what kind of CF they would like to film. Nichkhun confessed...
continue reading...
Super Junior’s Heechul hits up karaoke with his celebrity Друзья
posted by Bubblepop00 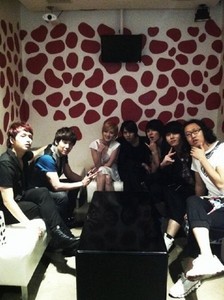 “Pleasantly recorded together for the first time in a long time!“

In particular, Simon D and Kim Kyung Jin’s expressions (seen at the front on either end) have drawn much laughter.

Netizens commented, “What program did Ты record?“, “Crazy personal connections“, and “Heechul-oppa is always in the middle Далее to a girl.”
INFINITE’s Dongwoo gets pulled off stage by an audience member
posted by Bubblepop00 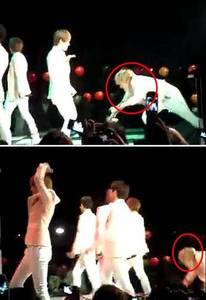 Even though there’ve been several reports of stars being injured by overzealous fans, it seems that security is still lax at festivals, as it was recently reported that INFINITE’s Dongwoo was pulled off stage.

On June 4th, INFINITE was performing “Nothing’s Over” at a public Музыка festival when an audience member latched onto Dongwoo’s leg, dragging him off the stage.

Fortunately, security managed to intervene and safely brought him back up. The members seemed unable to shake off their shock, however, as their facial expressions remained hard.

Netizens commented, “Dongwoo must’ve been so scared, how could they just pull him like that”, “Just seeing it is shocking, I can hear the screams from the crowd”, and “Even with security present, stars are still at risk. This is a problem.”
JYJ completes their world tour in Busan
posted by Bubblepop00 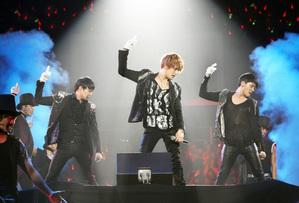 JYJ have finally completed their two-month world tour! The group performed in Thailand, Taiwan, China, Vancouver, New Jersey, Los Angeles, and San Jose, and have just brought their tour to an end with a final performance in Busan, Korea.

The trio was сказал(-а) to have shaken Busan to its roots with their fantastic performances on June 11th and 12th. Every lodging place near the stadium were booked to nearly full capacity, thus proving once again that the “JYJ effect” was very real. 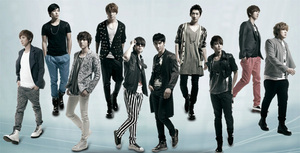 With the CD version of “Bijin” due tomorrow in Japan, Super Junior’s official Japanese website has been updated with new фото of the boys, along with a promotional clip.

“Bijin”, a Japanese version of their Korean hit song “BONAMANA“, was used in a commercial for the Популярное convenience store chain “Circle K Sunkus” that currently operates 6,257 stores throughout Japan. Recording the new song with the Japanese lyrics back in March wasn’t much of a problem for the members, and the commercial, that was actually already filmed in February, was almost done in one take, underlining the professionalism and versatility of the group.

The new фото shows the boys in their chic fashion, and also includes a brief profile.