Who's your favourite Tekken (Теккен) character?

My favourite character in the Tekken (Теккен) series is the Silent Jaguar, King.
He's a Mexican pro wrestler who wears a Jaguar mask to the ring. His mentor was Armor King He swore revenge against Armor King's foe, Marduk, but eventually reconciled with his foe. He is a silent and serious fighter.

I loved him since I played Tekken (Теккен) 3 for the PlayStation on my cousin's PlayStation 2.

He's also my favourite character between all the characters from улица, уличный Fighter and Tekken. 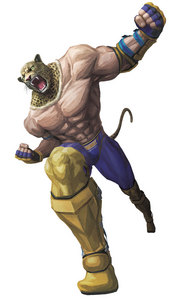