4
The Return of Toadface: The REAL Part 6
posted by peppergirl30
(I wrote Part 6 on the Назад chapter but realized it was actually part 5:p so...here's Part 6!)

Rose was feeling a bit anxious. She had signed her name, along with Albus and Scorpius, and then Albus passed it on to all the other Weasley's and their friends. He was supposed to be arriving in the Great Hall any секунда with the sign-up sheet.
Finally, he ran in.
''Ok, I have it! It passed practically around the entire school...'' Rose looked at the page and found the usual signatures:
Rose Weasley
Albus Potter
Scorpius Malfoy
James Potter
Louis Weasley
Victoire Weasley
Dominique Weasley
Lucy Weasley
Roxanne Weasley
Фред Weasley II
Aimee G.
Lizzie M.
Emily B.
It was only 13 people. Not much, but she would find ways to get еще members. Maybe she could get everyone's Друзья to join. Suddenly, Rose realized something. ''Where's Molly's name?'' Albus looked skeptical. ''You really think she would sign a paper to rebel aganist adults? Rose, she's Uncle Percy's daughter.'' ''But Lucy signed!'' Rose was attracting some attention in the Great Hall, but she didn't care. ''We all know Lucy isn't like Uncle Percy, Rose.'' It was silent for a moment. ''Where are we going to meet?'' Albus asked. Rose was dumbfounded. Didn't he ever listen to their parents stories about their Hogwarts years? ''Rose, I know they used the Room of Requirement, but how are we gonna get it to pop up? It came by luck for them...we might need a different option.'' Rose knew he was right. As much as her Uncle Harry tried to open it by asking in his 6th Year, Rose knew they couldn't try that everywhere in the school. ''Well, we'll just have everyone come up with one idea for a possible place to hold the meetings.'' Albus was seeming to lose hope. ''And we couldn't call it the 'D.A.' either! Dumbledore isn't even alive anymore!'' It seemed that wherever this organization took Rose, she always faced problems. But she couldn't give up. It was her mother's genes telling her to keep going. She was going to make them proud, and that was a promise. ''We're gonna do this, Albus. No matter what.''

2 Hours Later
Rose was anxiously waiting for Scorpius to pop into the library. Why wasn't he coming? She сказал(-а) to come at 10:00, and it was 10:30. He was usually on time to classes, and meetings. Where was he? Rose decided to look around for him in the castle. Not in the Great Hall, not outside, not in any of the corridors, so where? Rose was getting worried. She searched and searched until she finally found him outside. ''Where have Ты been? I've been waiting for Ты for-'' Rose cut off abruptly when she saw the scar on Scorpius's arm. He looked up at her. ''What?'' He asked. ''What is that?'' Rose demanded, her eyes still on the letters in his skin. ''What is what?'' Scorpius was Актёрское искусство daft at the moment, and it was making Rose even еще annoyed. ''That!'' She exclaimed, ''On your arm!'' Scorpius's eyes looked down. ''Oh....that...'' ''Yes! That! Did she do that do you?'' ''Well yeah, but-'' ''But what, Scorpius? But what? Why is that something you're ignoring? Ты should've fought back!'' Rose was furious. Why is it that the only people that saw how bad Umbridge was was Her, Albus, and the rest of the Weasley's? Umbridge wasn't a person Ты messed with. It made Rose feel so angry, thinking about her hurting the people closest to her in her life. She had to get the new D.A. going, and fast.
thrillergirl18, laylafly and 2 others like this
luv_muffin You've got to finish the series
peppergirl30 @luv_muffin Im working on Part 7 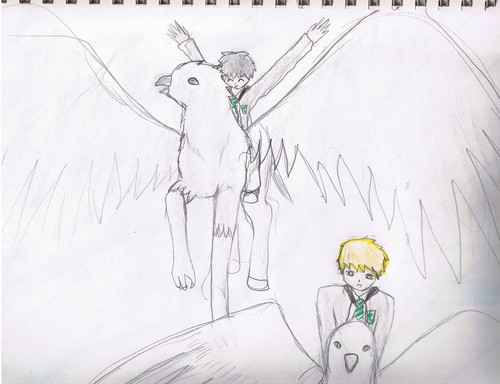 1
Having fun
added by copper27
Source: me

Teddy Lupin
added by berly
In this story Teddy has sadly inherited his father's werewolf condition and this is a video about his life. I know in the Книги it didn't happen ok but I thought it would be interesting to explore the idea.
video
teddy lupin
Гарри Поттер
7
The Return of Toadface Part 1
posted by peppergirl30
Rose,Albus, and James sat at the Gryffindor таблица in The Great Hall, awating the usual speech they were going to get from the Headmaster, Minerva McGonagall. ''Welcome, New and old Students to Hogwarts!'' All of the students applauded. Rose turned her head to see Teddy and Victoire sitting together, hand in hand. Since Rose wasn't in the mood for watching snogging right now, she turned to Albus. Albus seemed cheery today, due to the fact that he was grinning from ear to ear. For what reason, Rose didn't know. Headmaster McGonagall seemed to notice the arise of conversation during her pause...
continue reading...
4
The Return of Toadface: Part 4
posted by peppergirl30
(I did make New Generation D.A Part 1 but decided not to continue it. The Описание of the D.A lessons will be in this story)

*Back at the Potter House*
Lily Potter sat on her bedroom windowsill, painting her nails a silver color. It was a bright, sunny day, Lily's Избранное kind. After her nails dried, she hopped off her windowsill and went downstairs. Before she got to the bottom, however,she heard her parents talking. "If she's really back then-" "Harry we are not taking our children out of school over a professor." "Ron сказал(-а) he would-" "Harry. When has Ron ever been sane?" "Ginny, just because...
continue reading...
4
The Return of Toadface: Part 8
posted by peppergirl30
''I can see myself...wherever I look! It's soo cool!'' Lucy was ranting on and on about the Стена of mirrors. Personally Rose found it annoying, but blocked it out with her happiness. ''Can I store some of the merchandise in here? Umbridge always finds it in my Dad's old hiding places...'' ''Sure Roxanne, but leave us some room to practice.'' Rose was surprised that she was letting Roxanne do something that she normally wouldn't. She supposed it was the fact that she was filled with glee. ''Well, we have to get down to business.'' Everyone in the room turned to look at Rose. ''Oh goodness the...
continue reading...
4
The Return of Toadface: Part 6
posted by peppergirl30
Rose's eyes scanned the piece of parchment she was holding. It was just a letter sent from her parents, telling her the usual things happening at home. But this time, there was an extra bit to the letter, explaining, in detail, (thanks to her Mum) about what to do since Umbridge was back at Hogwarts. When she finished, Rose put the piece of parchment in her trunk, and left the Common Room to find Albus. She checked pretty much everywhere on the grounds, but hadn't found him. Come to think of it, she hadn't seen James anywhere either. Then it hit Rose. There was indeed, one place she had not...
continue reading...
3
The Return of Toadface: Part 3
posted by peppergirl30
Rose was very frustrated. Her latest homework from DADA class was to write an essay on how her relatives were evil. But the thing was, Rose didn't want to say that they were evil. She didn't even know anything that they did that even was evil. It was completely unfair.
"Well, they did go against the Ministry's beliefs, along with the Minister himself!" As much as Rose hated to admit it, she went to Umbridge to get an essay idea. "You could write about that. Now, off Ты go!" She shoved Rose out of the classroom and slammed the door. Rose decided that Umbridge's Совет would come as a last resort....
continue reading...
2
The Return of Toadface:Part 10
posted by peppergirl30
Rose was waiting for Hagrid to open the door. ''Are Ты absouletly sure that he's home?'' Lucy asked. ''You're never sure that he's home. Ты just hope.'' And after that, it was silent. Roxanne stepped up behind Rose after a couple minutes. ''Rose,'' She murmured, ''I don't think he's here. Come on. We'll stay with Ты all день if Ты want us to.'' Rose didn't think it would happen, but tears started to fill her eyes. ''Come on,'' Roxanne сказал(-а) again. She tugged on Rose's arm. Rose relucantly turned around and faced her cousins. ''I just really wanted to see him.'' Rose mumbled. She felt tears...
continue reading...
4
The Return of Toadface: Part 7
posted by peppergirl30
Rose had been working on her own lately. Albus was busy with homework...and Scorpius had 2 months of detention for being the only Slytherin in his год to not Присоединиться the Insqutorial Squad. His father, along with Umbridge, was giving him a hard time. She felt bad, and the sad thing was she couldn't anything about it. Sometimes the work all got to her. She couldn't do it alone, and she needed a Weasley ally. But who to choose? Roxanne was too wild, she would surely get the both of them into detention. Then there was Fred, and he was a bit mellower than Roxanne but there was the slight chance that...
continue reading...
4
The Return of Toadface: Part 9
posted by peppergirl30
Rose woke up the Далее morning, feeling terrible. She was thankful that it was a Saturday. That way, she could spend the whole entire день in her dormitory and she would never have to face James или Albus. At that thought, she felt guilty. Why was having mainly male cousins so hard? All of the sudden, she heard voices. Not pretend voices, voices of people she actually knew. ''I still think James acted like a prat.'' ''Vicki, everyone thinks James is a prat. It's not new.'' ''I just can't believe how Albus just exploded after Rose left yesterday. Like he was pissed off at James, and over Rose....
continue reading...
4
The Guide to the Ages of my Toadface Characters
posted by peppergirl30
This is only how old everyone is in MY stories. Everyone has their own opinion... 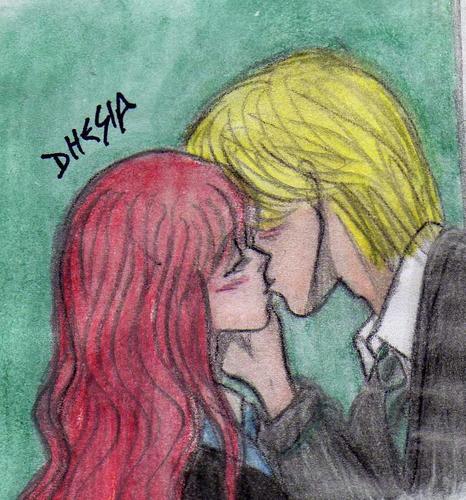