Live Another день part 24
posted by Robin_Love
The mountain was quiet, minus the ticking of the clock and the whirring of the computer. She checked their vital signs continuously. They all seemed fine. Seemed like they would wake up any секунда now. Except Becca. The shell had still protected her, but Megan was getting worried. Nothing seemed to work. She had tried everything.
“What can I do? I've done my best but nothing is working!”
Megan looked down as the tears began to pour from her eyes. Everything was a mess and she felt her сердце breaking. It was like loosing her family all over again. But this time it was on Earth. Megan looked up as the hard covering around Becca turned from black to a light blue. The vital signs hadn't changed, but something had. Megan looked at the clock; an час left. She prayed that the others would find the cure and save the team. She didn't know why the others were still asleep, but she just hoped they would wake up soon.
“Someone help me!”

Willow fell to the ground as she голубь away from one of Masq's thrown attacks. The sorceress was powerful and was willing to kill. Willow hadn't met anyone like her in a long time. But she knew that there was a history behind the evil. Nevertheless, Willow felt no pity as Masq was attacked from all around. Masq lashed out with еще magic, but it didn't help. They could tell Masq was fading and just needed to keep her from gaining еще energy.
“Fools! Ты cannot kill me! I am unstoppable!”
Billy suddenly pulled Willow up and away from where another bomb had taken rest.
“Thanks,” she whispered.
“No problem. Just keep it going for a few еще minutes.”
“Okay.”
“I'll see Ты later.”
Billy ran off again and Willow ducked from another attack. She looked around. Artemis wasn't doing much better. She had run out of arrows awhile назад and was stuck dodging the magic Masq threw at her. Adam was able to phase through most of them, but he was looking winded. Their battle felt еще like a war. And the doors had been locked when Masq first started the fight. What I wouldn't give for my постель, кровати right now! Willow thought as she ducked yet again. This is going to last awhile.
Mclovin_69 OH YOU CAN BEAT HER SAVE BECCCCA
Robin_Love LOL! Glad you like it!
66Dragons Maybe Becca's blue Wiccan shield will save her butt and she'll save Willow and Artemis!
Robin_Love You'll have to wait and find out!!!!!!! I never let on to ANYTHING!! Too fun to write suspense!

5
They babysit?!
added by Robin_Love

2
Eat Your сердце Out!
added by Robin_Love

-GOTHAM SQUARE-
"Robin, is everything in order now?" Batman’s voice echoed down Robin's ear piece. "Don't worry everything is back in order the police are just finishing up!" сказал(-а) Robin, "Good I need Ты team back here ASAP I have some news, Бэтмен out" and their conversation ended. He turned around to see everyone was recovering from killer ice and icicle Jr’s attack. "Batman need's us back to base now he says he has news for us" informed Robin. "Yeah but batman’s type of news is just telling us bad we did!" replied Kid flash brushing snow of his shoulder...
continue reading...
FireBlaster Episode 17 "Circus is in town,and a depressed Robin"
posted by Denelys 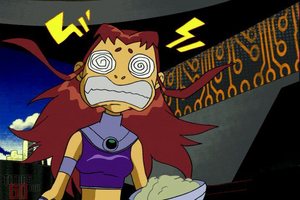 Am I such a bad cook(I am are`nt I)
Robin are Ты okay?you`ve barely touched the Еда on your plate.
"It`s nothing im not hungry."Robin replied with a sad expresion and left.
Is my cooking that bad?
"No,he just- sigh"Batman cut him self off.
Something about his past that reviels his secret identedy?
"Yes,and Ты did`nt want to know so he bottles it up and puts или tries to put on a Храбрая сердцем face."Batman told me.
If I ask him to tell me would he?
"i doubt it."Batman responded.
Then how about if Ты tell me?
"Im sorry but he сказал(-а) he should tell Ты and i respect that."Batman responded.
Ohh.Hey I heard the circus is in town can I take him?you...
continue reading...

5
Be my Valintine?
added by Skittles98 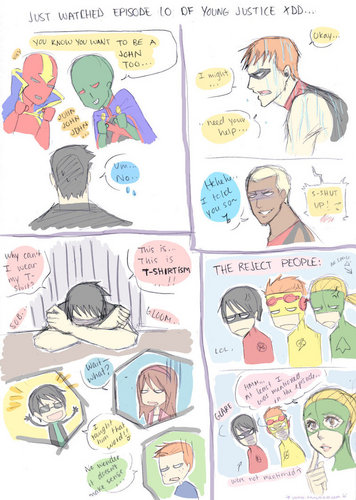 Those four words rang out towards the entire building and found its way to the кухня where Aqualad, Robin, Megan and Superboy were busy eating breakfast. All four of them looked up at each other. Kid Flash and Artemis were fighting… again…

At the same moment Wally and Artemis walked into the kitchen. Artemis was soaking wet with a towel wrapped around her and Wally's face was red from laughing. It didn't take a genius to figure it out.

"Sorry, it was an accident." Wally said, apologizing....
continue reading...